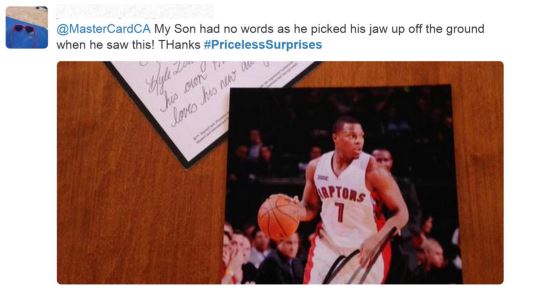 Do you remember seeing MasterCard commercials that always ended with an experience or moment dubbed to be “priceless”? That campaign did wonders for MasterCard’s image and adoption. So much so, that the company continued to use that slogan for more than 15 years. However, a good thing can only last so long, and in2014, it was time to try something new.

What MasterCard decided to do was to immerse itself in the burgeoning social media culture, specifically Twitter, to purposefully and consistently engage with customers. This manifested as “Priceless Surprises”. The idea here was to connect with customers by not only enabling priceless moments, but by MasterCard being a part of creating those moments.  MasterCard began a campaign where cardholders could either use their MasterCard for purchases and be automatically entered to be surprised with something from the company, or cardholders could take to Twitter and, using the hashtag #PricelessSurprises, a tweet would randomly be chosen for surprises as well.

The results of this were tremendous. Customers were extremely receptive and appreciative to have more interaction with MasterCard than just through purchases. There was now a connection that served to both increase brand loyalty and card envy – when one person is surprised, those around them begin to think about applying for a MasterCard so they can also participate. Cardholders feel excited to tweet to MasterCard, both to win surprises, but also to thank MasterCard for the program and for the rewards.

With Priceless Surprises, MasterCard took a huge step towards genuine customer engagement, and they continue to be successful. Hundreds of thousands of surprises have been given, and MasterCard is now working with a mobile advertising firm to create a mobile app that will keep cardholders updated on upcoming events and opportunities to be surprised.