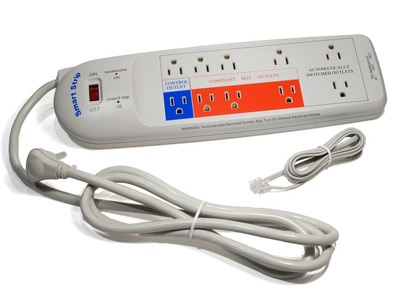 Did you know the average home wastes $200 per year powering electronic devices that are not in use?  Remembering to turn off and unplug devices can be difficult, especially if you have hard to reach devices and outlets. But there is a simple and automatic way to do it and avoid wasting electricity in the process: use an advanced power strip.

Timer Power Strips turn off all of the devices plugged into them on a predetermined schedule.  Some timer power strips are digital and some of the older versions have a dial you turn.  Both allow you to turn off certain devices without being there or being awake when it happens.  These are great for setting your holiday lights to turn on and off automatically. If you try to stick to the same sleeping schedule and you like to watch TV in bed, you could set your timer to turn off the TV each night so that you can fall asleep and not worry that your TV will be on all night.

Activity Monitor Power Strips are more advanced and usually more expensive than the other power strips, because they have sensors that recognize when nobody is in the room.  When the activity monitor doesn’t sense anyone, it will automatically cut power to all of the devices that are connected to it. These are great for entertainment centers and can be perfect for video game consoles that are often left on or plugged in by children.

Master Controlled Power Strips will turn off all devices plugged into it when the master device is turned off.  For example, if you are using a master controlled power strip for your entertainment center, you would likely plug the TV into the “master” receptacle and then all other devices into the other receptacles.  When you turn your TV off, the speakers, video game system, and anything else you may have plugged into the strip will also all turn off automatically.

Why You Should Upgrade to Energy Efficient Curtains